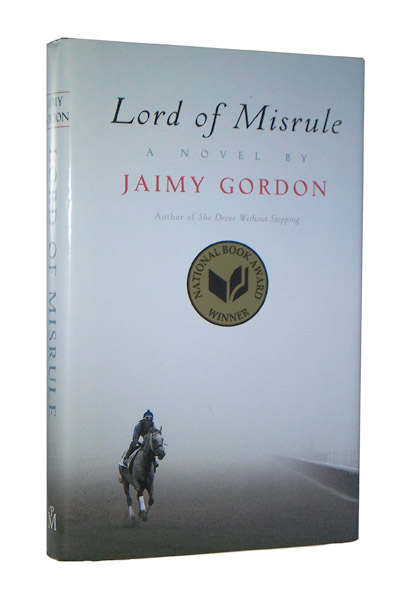 ​Winner of the 2010 National Book Award for Fiction

At the rock-bottom end of the sport of kings sits the ruthless and often violent world of cheap horse racing, where trainers and jockeys, grooms and hotwalkers, loan sharks and touts are all struggling to take an edge, or prove their luck, or just survive. Equal parts Nathanael West, Damon Runyon and Eudora Welty, Lord of Misrule follows five characters -- scarred and lonely dreamers in the American grain -- through a year and four races at Indian Mound Downs, downriver from Wheeling, West Virginia.

Horseman Tommy Hansel has a scheme to rescue his failing stable: He'll ship four unknown but ready horses to Indian Mound Downs, run them in cheap claiming races at long odds, and then gut out fast before anyone notices. The problem is, at this rundown riverfront half-maile racetrack in the Northern Panhandle, everybody notices -- veteran groom Medicine Ed, Kidstuff the blacksmith, old lady "gyp" Deucey Gifford, stall superintendent Suitcase Smithers, eventually even the ruled-off "racetrack financier" Two-Tie and the ominous leading trainer, Joe Dale Bigg. But no one bothers to factor in Tommy Hansel's go-fer girlfriend, Maggie Koderer. Like the beautiful, used-up, tragic horses she comes to love, Maggie has just enough heart to wire everyone's flagging hopes back to the source of all luck. ​

For the Kindle edition, go here.

Longlisted for the Orange Prize

Add to Cart
Also available from:
<
>
THE NEW YORKER
Gordon's fourth novel...is set at a run-down half-mile racetrack in West Virginia and each of its four sections focusses on a different race. The perspective shifts between a groom, a bookmaker, a trainer, and his girlfriend, a relative outsider to the ways of the backstretch. Gordon's characters--despite caricaturish names like Suitcase Smithers and Medicine Ed--are complex and finely drawn, and she successfully steers clear of most horse-racing cliches, while unspooling a plot of corruption and intrigue. Gordon saves her best writing for the horses, describing castrations, accidents, beatings, and deaths with painful intimacy. She also excels at drawing out short races into several pages while retaining all their pace and excitement.

CHICAGO TRIBUNE: Editor's Choice
A long shot for the winner's circle, "Lord of Misrule" won this year's National Book Award in fiction. Although the book, the sixth by author Jaimy Gordon, was a decade in the making, it is a fast tour through the underbelly of the sport of kings — horse-racing. The rundown racetrack central to the story is a separate universe with its own codes and castes and Gordon, who teaches at Western Michigan University in Kalamazoo, vividly tells the story of the trainers, jockeys, grooms, railbirds and girlfriends in this land governed by money and luck. Gordon has created a cast of original characters, including the track's horses, which are each full of personality and lore. Gordon describes the full spectrum of hope and despair on race day: "All are reasonably clean for this race, scarred and gleaming dark bays of various shades and descriptions — the commonest run of racehorse, dirt cheap, bone sore and all more beautiful than chests of viols of inlaid rosewood and pear." — Elizabeth Taylor, literary editor

KIRKUS REVIEWS (starred)
A novel of luck, pluck, farce and above all horse racing—not at tony and elegant sites like Churchill Downs and Ascot but rather at a rinky-dink racetrack in Indian Mound Downs, W.Va.
Gordon (Bogeywoman, 1999, etc.) clearly loves the subculture of grifters and ne’er-do-wells whose lives center on a venue that obviously has never and will never bring them success. Her lowlifes have names like Two-Tie, Medicine Ed, Kidstuff and Deucey, and they’re capable of speaking a kind of racetrack patois occasionally reminiscent of Damon Runyon characters: “So I want you should write me a race, well, not me personally, fellow from Nebraska, kid I used to know back when—actually I used to know his mother…She was very good to me. Alas, I fear I did not return the favor like I should have.” At the center of the novel is Tommy Hansel, a horse trainer with a get-rich-quick scheme that he feels cannot fail. He plans to enter “sure-fire” winners in claiming races, benefit from the long odds, then get out of town quickly. Nothing, of course, goes according to plan, especially since everyone seems on to his scheme, and the horses aren’t as cooperative as Tommy would like them to be. Complicating the issue is the quirky, intelligent Maggie Koderer, new to the horse-race business but nonetheless Tommy’s love. Maggie is college-educated but is drawn to the seamy underbelly of the track and the broken-down beauty of the horses. Gordon structures the narrative around the four horses, the last best hope being Lord of Misrule, and she seamlessly moves the reader from one narrative consciousness to another without being manipulative or intrusive. The writing about the races themselves is a tour de force of energy and esprit. By the end of the novel none of the characters quite have what they want, but most of them get what they deserve.
Exceptional writing and idiosyncratic characters make this an engaging read.

REVIEW OF CONTEMPORARY FICTION:
Giving lie to the idea that never the twain, or, rather, the Mark Twain, shall meet; or, alternatively, giving lie to the idea that the gulf between dialect-heavy narration and literary fiction cannot be bridged by contemporary writers, Jaimy Gordon's swampy-mouthed Lord of Misrule evokes as much the abovementioned Mississippian master of dialect as it does William Faulkner, another literary giant attentive to colloquial speech; Gordon proving in her voluptuous novel, marked by its lyrically sweeping style, that she too is attentive to spoken language's indelible rhythms, its evocative idiosyncrasies, its poetic subtleties. Demanding to be read aloud, the story, set in 1970, unravels in a sad and seedy West Virginian racetrack, which in Gordon’s hands is really a sensorium, her prose miring you in the mud of it ("The sun beat down and by three the red dirt glowed back and around each barn and strip of grass like the works of a toaster"); the stink of it ("the dark blue restless air fragrant with medicinals, Absorbine, liniment, pine tar"); the shrillness and stillness of it (“And alongside of her, rolling so slow in the dirt road it made less sound than her weeping, just popping a stone now and then, was a dark, dark car with a swanky silver roof . . .”). Drawing from her own decades-past experience of having worked on a small track, Gordon commandingly relays the story of a raffish band of rapscallions, dreamers and schemers all, veritable slaves to the promise of easy money; a grim and gritty story evoking as much the dissipation of a gambler’s life as it does the violent vicissitudes of intimate and profligate relationships; a story weaving terrible moments, like kidnapping, murder, and rape; a story singing of a singular battle-scarred nobility; a story as darkly layered as the American dream and nightmare. [John Madera]

LOS ANGELES TIMES
This rich, soupy (as in primal soup, many ingredients) milieu that Gordon creates — all the names and hints of back story glimmering in the dust — serve to make a character shine, really shine, when he or she rises up and out. You hear chains popping all through this novel, little acts of will and big acts of self-determination. It's astonishing how quickly, with all this description, Gordon can get to a philosophical point or make a character unforgettable.
All of this makes "Lord of Misrule" a fun book to read, fun that comes not without its raw anxieties — the void at the edge of the track. It ends, of course, in a race, a duel between darkness versus light. Lord of Misrule, a horse resurrected from a truncated career to win a few races, "threw back his head, snorted out dust and rolled his eye at the other cheap horses. His black tail arched and, ugly as Rumpelstiltskin, he let drop great soft nuggets, part gold, part straw, all the way down the ramp."
Click here to download a pdf of the opening chapter.

Read the Daily Racing Form review: A Gem of a Racing Novel

Read a review from the Omnivoracious blog: Omni Crush: Lord of Misrule


REVIEWS OF UK EDITION:
The Independent: Deserving Dark Horse of a Winner

Listen to Steve Bertrand's interview with Jaimy Gordon:Bertrand on Books