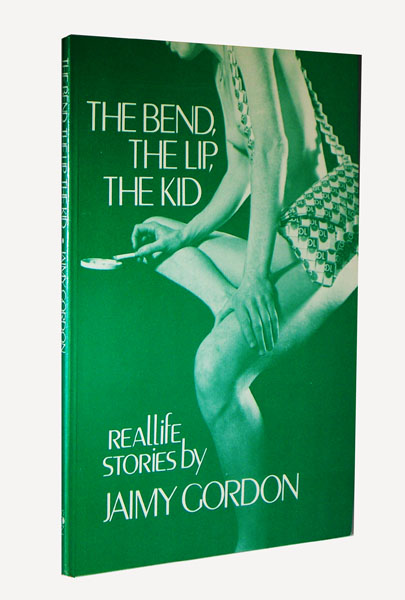 The Bend, the Lip, the Kid

Published in 1978 by SUN Press of New York City, which has provided the remaining copies of this formally and stylistically unusual book-length poem, an early (and rare) Jaimy Gordon publication now.exclusively available from McPherson & Company

The Bend, the Lip, the Kid: Reallife Stories one one level is, as the New York Times noted, "a verse narrative about a jailbird named McMagus who is convinced that the reason men become criminals is that their penises are unnaturally curved." There is more to it than sensationalism, of course, as the story concerns a young woman caught up in the society of a group of grifters and small time punks. She's the "Lip," the one with the words, and she's in love with the "Kid," an affair doomed from the start. It owes something to Damon Runyon's "Guys and Dolls," but here thereis a more documentary quality to these real-life stories.

"Vignettes, snippets of dialogue, stall scribbles, all centered on a delirious, dysfunctional relationship between a conflicted gal living in emotional purgatory, and her troubled, petty lifer of a lover who is always up for starting some shit, with her, with cops, with the world. They're both institutionalized in their own ways, and neither is better for it. To read this is like hearing it through the wall rather than directly from them, a little muffled and voyeuristic. This even despite the fact that it is presented as though in earnest, as though it is addressed to you, as confessional."—Paquita Maria Sanchez, Goodreads

"Jaimy Gordon is a writer who builds her worlds with language. The words she deploys in the mouths of her characters are not only part of the world, but the fabric of it. In this way, all of her landscapes are unexpected, completely other, and magnificent. All of her work is brilliant. I especially adore The Bend, The Lip, The Kid, in which a Providence, RI inmate is convinced he can tell who is evil by the bend in their penis, and Bogeywoman, in which the frightfully charismatic and lovesick Ursula Koderer escapes Camp Chunkagunk (aka Tough Paradise for Girls)."—Rita Bullwinkle