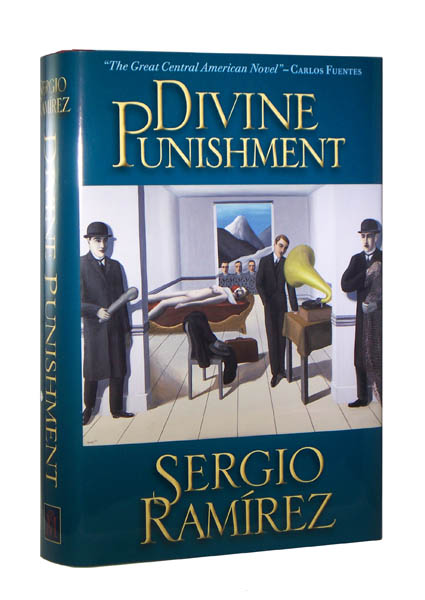 Winner of the 2017 Independent Press Award for World Fiction.

Finalist for Foreword Magazine's 2015 IndieFab "Book of the Year Award" for Historical Fiction.

Translated from the Spanish by Nick Caistor with Hebe Powell.

Divine Punishment was declared by Carlos Fuentes to be the quintessential Central American novel. Here Sergio Ramírez transforms the most celebrated criminal trial in Nicaraguan history —the alleged murders in 1933 of two high society women and his employer by a Casanova named Oliverio Castañeda — into an examination of Nicaraguan society at the brink of the first Somosa dictatorship. Passion, money, sex, gossip, political intrigue, medical malpractice and judicial corruption all merge into a novel that reads like a courtroom drama wrapped in yellow journalism disguised as historical fiction posing as a scandal of the first order.

“Divine Punishment is by far the best novel by Sergio Ramírez, former vice-president of Nicaragua, and one of my favorite novels, period. Set in the Nicaraguan city of León in the 1930s, and based on a true story, it concerns the case of Oliverio Castaneda, a young charmer and social climber accused of killing neighbors, patrons, and lovers by poisoning. The convoluted affair (still used as a case study in Central American law schools) was never solved, and Ramírez himself cagily leaves it open-ended. Hilarious, riveting, beautifully constructed and written.” — Dan Bellm

To read a sample, see the link below.

Add to Cart
Also available from:
<
>
COUNTERPUNCH: “What I find utterly brilliant in Divine Punishment is the constant reversals in the plot and the method of its construction. For one example of the former, consider that for a time the older doctor believes that his pupil, Dr. Salmerón, is correct: that Castañeda is a murderer. Thus, after Matilda dies, he swabs her mouth in order to test for poison, but then the swab is inadvertently thrown out by his assistant. There are many incidents such as this one where a piece of potential information that would verify the poisonings (instead of a fever) are stolen or destroyed. But the even more impressive aspect of the entire novel is the multiple voices that narrate the plot because court documents, interviews, newspaper articles, letters, and other forms of communion are used to relate the story. There is even a place late in the narrative when Rosalío Usulutlán—remember him, he’s the journalist who published those three articles?—self publishes a pamphlet summarizing the entire story of the murders in León, by saying that he is narrating a parable, without using the actual names of the people involved. This is a necessary move. He has lost his job at the newspaper because he has been accused of libel.
The focal point of the entire novel is class, with the elite and their servants relating different accounts of events that have transpired, the doctor of the rich at odds with the doctor he has trained, whose background is lower and whose patients are the poor—plus the political machinations of the Samoasan military government manipulating events in León, also for its own benefit at a time shortly after the gringos have left the country, supposedly to fend for itself. The layers of conflicting forces are, as I said at the beginning, like the layers of an onion, slowly being peeled away. Best of all, the ending (Castañeda’s guilt or not) is left ambiguous.
If you can read only one novel that I have praised during the past two or three years, read Sergio Ramírez’s Divine Punishment. Its grandeur will knock you over.”—Charles R. Larson


THE COMPLETE REVIEW: "Divine Punishment is a chronicle of (apparent) murder and the prosecution of the man presumably responsible, but it's also a portrait of the society and structures of that time. Among the conflicts that form part of the narrative is the ongoing one between two of the local doctors, who take very different positions regarding the causes of death (and the proper assessment of the post mortem evidence) -- a charged relationship between mentor and student that shifts as the case progresses. Though arguably provincial, this León is not some simple backwater town; among the interesting dynamics are also those between the local establishment and the outsiders involved in the case (notably the judge and, of course, Castañeda).
Even as so much documentation is presented in Divine Punishment, Ramírez's novel does not feel simply documentary; it is not a simple case-account or procedural. Yet Ramírez also scrupulously avoids taking advantage of his authorial position in guiding readers to specific conclusions: even as the unpleasant Castañeda's guilt can hardly be questioned, Divine Punishment remains in many ways a murky tale (appropriately sinking in particularly dark mire in its resolution, and Castañeda's fate).
All in all, it's an unusual piece of fiction: part legal-criminal thriller, part period-piece, often with a subversive little humorous touch, Divine Punishment doesn't conform to many expectations, but proves, in going its own (distinctive, roundabout) way, successful in its own right."— M.A. Orthofer

PUBLISHERS WEEKLY: "Ramirez, former vice president of Nicaragua, published this noirish tale of murder and deceit while in office in 1988, and it appears in English for the first time in a wonderful translation by Caistor. The story, based on a real series of unsolved poisonings, takes the form of a legal case, replete with court reports, interviews, testimonies, depositions, and letters from the main players. This interesting and complex structure includes a barrage of character names, places, subplots, and substories—Ramirez effectively recreates an entire world of intrigue around the case. But the central story line revolves around the motives of the accused murderer, Oliverio Castaneda. Ramirez animates the small town world of 1930s Leon, Nicaragua, and its criminal justice system at a time that coincides with the country’s struggle to operate under a civil and judicial, rather than military, government. The fictionalized version of Castaneda’s crimes are driven partly by love and revenge and partly by his desire to control a large financial fortune. The novel also ratchets up the tension between the curiosity of a nosy media and the public’s nearly insatiable appetite for a scandalous trial. This is a big, beautiful novel—a compelling historical drama of competing narratives and colorful characters that is self-aware and tinged with black humor. The author’s afterword and translator’s note provide helpful context for American readers"