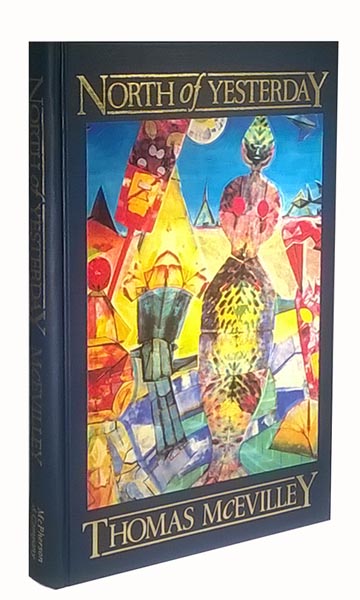 For the paperback edition, go here.

North of Yesterday is written in a fluid mixture of prose and verse. It incorporates classical meters and narration, and systematically interweaves the Orpheus myth with a contemporary situation: the story of a death by heroin overdose. Love, guilt, desire and degradation are paired in the stories of Della and Wally, and then again in those of Vincent and Waz, and made poignant mockery by a mad poet, Quintus of Smyrna. This is a bizarre epic of Everyman, a challenging prose invention with few antecedents: North of Yesterday joins that great tradition of sardonic, black-hearted comedies extending from Lautreamont's Maldoror and Huysman's Against Nature, to Hedayat's The Blind Owl and the recent works of William Burroughs.

Spring was turning into summer. I stood where the waves crashed, waiting for Della in the late afternoon by the sea. Birds rested on the swelling crests, fluttered up from their closing grip, then rested again. The waves poured closer, the sun sank down, and the birds screeched on in their game of death.

And Della was no longer just late. She was not coming. She had flown through the crack in the vase. . . .

This beginning to North of Yesterday sets the tone for the compelling journey that quickly follows, a travel beyond space and time into the terrain of the unconscious, the synesthesia of dream. It is a novel of male psyche, the multi-layered recesses of mythology which define the object of desire and the destructive/redemptive quest. The tale forms a captivating matrix of the interior realm through an unfolding stream of cultural remnants (with archetypal and architectonic language), unmasking an essential conflict within the Western mind. There is both murder and mystery at its core, but it is a hermetic mystery of supra-consciousness, the transmigration of souls, and it may be that murder occurs nowhere but within the imagination . . .