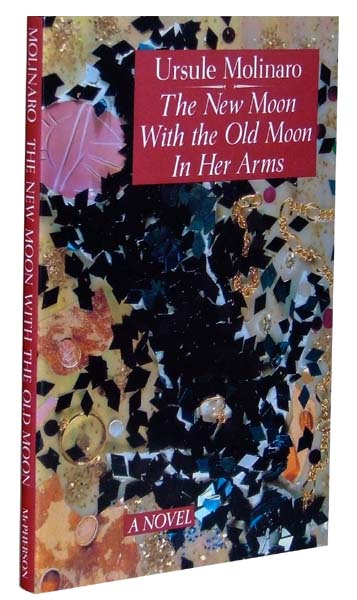 The New Moon with the Old Moon in Her Arms

SKU: 1291
$12.00
$12.00
Unavailable
per item
In a yearly ritual the citizens of ancient Athens chased a couple in wedding regalia through the streets under a hail of stones, to shouts of "Out with sickness and famine! In with health and wealth!" The broken bodies were left to decompose outside the city gates. Normally the victims would come from among society's downtrodden or outcasts, and exchange their lives for a year of luxury at the city's expense. But in defiance of tradition, and as an expression of protest, a poet from an aristocratic family volunteers her flawless 30-year-old body. This is her story.

Paperback, 128 pages, 5.5 x 8.5", 1993, 0-929701-29-1
For the clothbound edition, go here.
Add to Cart
Also available from:
<
>
PUBLISHERS WEEKLY: Molinaro's clever feminist novella is actually more like an extended (perhaps even a little attenuated) anecdote, set in ancient Athens. The female narrator is a nameless 30-year-old poet who has volunteered to be sacrificed by stoning on the feast day of Thargelia in order to expiate the sins and cure the illnesses of the city's inhabitants. Since the sacrificial ``bride'' is highly visible for a year before her death, our heroine sees the self-sacrifice as striking a blow for women's rights in an increasingly patriarchal Athens. However, her plans for death are upset when she becomes involved with a young girl and her sponge-diver father. Molinaro alternates passages from the poet's diary with lengthy disquisitions on Greek culture, from moon worship to medicine, revealing repeatedly how the female aspects of that culture have dropped from our view. These veritable footnotes lend the diary a historical context that in turn gives considerable resonance to the book's surprisingly downbeat ending. Molinaro shifts from a wry, bemused tone to one of melancholy, suggesting the irreconcilable nature of the male/female conflict that is at the center of the story and of the history that Molinaro recounts.


KIRKUS REVIEWS: An original myth-laden novella, set in ancient Athens, about a woman who offers herself as a public sacrifice in order to revive a moon goddess cult. In a learned, readable style, Molinaro makes up a feminist fiction that, while occasionally cluttered or pedantic, is finally human and moving. The narrator—a 30-year-old unmarried poet—is kept sumptuously at public expense for a year before the ritual (or ``Thargelia'') in which she and a man, a surrogate bride and groom, will be chased through the streets and stoned to death on Expulsion Day. But unlike past victims, who were destitute before the year of public care preceding their deaths, our narrator is affluent from the get-go. At first, she romanticizes her decision, remembering how, as a baby, she was given ``a pebble to throw.'' Now, she is determined to ``throw out the steadily growing discrimination against my sex.'' In the course of the story, she becomes involved with a sponge-diver and his daughter and otherwise reflects, in excerpts from her diary, about myriad things. Likewise, Molinaro, in her own academic voice, pads the story with lit-chit, feminist theory, arcane scholarship, and even commentary about sponge-diving. The result is a historical fiction, written in a postmodernist fragmented style (which mostly works), about a woman who is full of “causes that concerned me only as fillers for my audienceless, loveless life” and who comes finally to a tragic maturity.