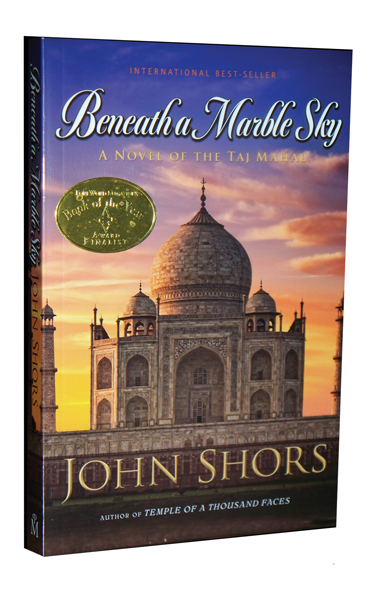 Beneath a Marble Sky

For the Kindle edition go here

Add to Cart
You may also purchase from:
<
>
PUBLISHERS WEEKLY: "Shors's spirited debut novel tells the story of the eldest daughter of the 17th-century emperor who built the Taj Mahal. . . . With infectious enthusiasm and just enough careful attention to detail, Shors give a real sense of the times, bringing the world of imperial Hindustan and its royal inhabitants to vivid life."

LIBRARY JOURNAL: "The book is a thrilling tale of the interactions of characters recognizable for their loyalty, duplicity, and passion, and will appeal to a wide audience. The author has included enough accurate details to make regular readers of historical fiction happy, too. Highly recommended for all libraries."

THE DES MOINES REGISTER: "Elegant, often lyrical, writing distinguishes this literary fiction from the genre known as historical romance. It is truly a work of art, rare in a debut novel."

MIDWEST BOOK REVIEW: "Beneath A Marble Sky by John Shors is a fictional treatment of the legendary story of Shah Jahan, who in 1632 was the supreme ruler of Hindustan. Shah Jahan is perhaps best known for creating the Taj Mahal as a legacy to the love he shared with his empress. Beneath A Marble Sky tells of Princess Jahanara and her efforts to weather court intrigue and prevent a terrible civil war, and conceal her secret love from her husband. A majestic novel, that irresistibly draws the reader within its saga of human struggles, failings, alliances and betrayals."

FOREWORD MAGAZINE: "Although he brings Jahanara to life gradually, and makes her pain and ecstasy feel real, Shors also creates a vivid and striking world that feels as close as a plane ride. Most important, he manages to convey universal feelings in a tangible and intimate way. Shah Jahan’s grief isn’t just that of a man who lived centuries ago; it’s a well of emotion felt long before Mumatz Mahal ever lived, and is still felt today. Shors’s ability to tap into that well, and make it so alive, renders the novel as luminous a jewel as any that adorn the Taj Mahal’s walls."

ST. PETERSBURG TIMES: "Shors' account portrays Jahanara into adulthood and is vivid in detail, down to the mirrored rings the women wore so they could look at themselves.
Early in Beneath a Marble Sky, Shors sets up conflicts such as the rivalry between brothers Aurangzeb, who would imprison his father, and the gentle Dara, rightful heir to the throne.
Shors does take literary license with accuracy. For example, he has Jahanara falling in love with a man whom she can never marry, Isa, who Shors names as the architect of the Taj Mahal. Historians actually are in disagreement about the identity of the architect.
Beneath a Marble Sky sacrifices such details to tell a story of romance and passion. The result is a wonderful book if you want to escape to a foreign land while relaxing in your porch swing."

ROCKY MOUNTAIN NEWS: "Shors dramatically reveals a man whose monomaniacal drive for power and whose implacable hatred knows no limits, extending to fratricide and even condemning his father to slow death.However, Shors balances Aurangzeb's evil with the strong love surrounding the shah, his other children and even special servants as all seek a world of peace and beauty in the arts, architecture and learning.
The turbulence of the novel unfolds against a richly drawn backdrop of Indian life, replete with textures, sounds, sights and scents from the bazaars to the palace. Unfortunately, Shors' determination to draw his readers totally into the setting ultimately detracts from the novel's considerable power because his descriptions are too lengthy and too frequent and occasionally slow the novel to the pace of a sluggish river.
Yet, in spite of this flaw, the book remains an absorbing novel about the extremes of passion - with much relevance for our own time."