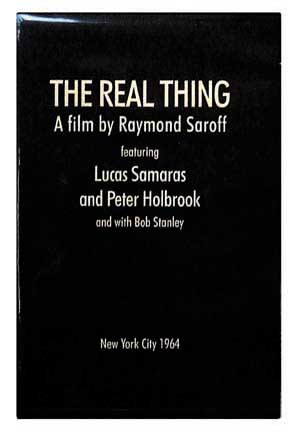 The Real Thing : A film by Raymond Saroff (dvd)

After filming Claes Oldenburg's Ray Gun Theater Happenings in 1962, and inspired by the saturation of all facets of modern life with sexuality, Saroff set out to create a new film in 1963-4. Joined by three artist/actors—Lucas Samaras, Peter Holbrook, and Bob Stanley—Saroff filmed in the Manhattan subways, on rooftops, in the workroom of an IBM office filled with giant computers, and in the buildings of lower Broadway. He also appropriated imagery from television, such as liquor and cigarette advertisements, and spliced in found footage of an old "blue" movie. Very much a document of its time, this is a silent, black-and-white "art film" photographed on location with a hand-held camera using only available light. The editing emphasizes the mechanical artificiality of consumerism as opposed to the earthiness of the everyday, with its crude but honest appetites, presumptions, and vanity. The Real Thing possesses a rare authenticity in its unblinking satirical embrace of nascent American sensuality more than forty years ago. It was never exhibited publicly until 2005. The filmmaker also notes that "after seeing the film privately in 1964 with Lucas Samaras, Andy Warhol confided in me that he had never seen a 'blue' movie before. You are thereby advised that this is an 'X'-rated film." Selected for the permanent collection of the Whitney Museum.