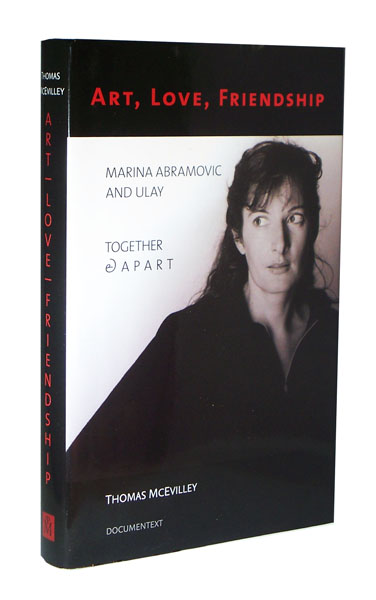 Illustrated with over 65 photographs.

Once upon a time two daring young artists — Marina Abramovic from Yugoslavia, and Uwe Laysiepen from West Germany — met in Amsterdam, fell in love, and began an extraordinary collaboration. Their guiding principles: "no fixed living-place, permanent movement, direct contact, local relation, self-selection, passing limitations, taking risks, mobile energy, no rehearsal, no predicted end, no repetition." For a dozen years, and across five continents, they produced a body of mixed-mediat and conceptual artwork that is regarded as being among the most powerful and emotionally challenging in all of Performance Art. Seven years after they began their journey they met Thomas McEvilley, an art critic on assignment, and the three became fast friends. When love came to an end five years later, Marina Abramovic and Ulay created a three-month-long performance of walking the Great Wall of China from opposite ends as the culmination of their life and work together. Thomas McEvilley was there with them, and wrote the story of that work; and for the following twenty-two years— while Marina Abramovic continued her performance career, and Ulay returned to his roots as a conceptual photographer—Tom continued to write about them, exploring the progress of meanings that constitute the collective work, together and apart, of two extraordinary artists. This is their book.

Add to Cart
Also available from:
<
>
"Among his previous books McEvilley counts The Triumph of Anti-Art (2005), which surveys the postmodernist movement, including the role of performance art in it. A much more personal look is provided by the book at hand, which gives the reader a fly-on-the-wall view of the early days of Marina Abramovic & Ulay (né Uwe Laysiepen), her long-time lover and collaborator, both of whom McEvilley befriended 27 years ago. It’s an engaging read, with a narrative that is more like that of a novel than an academic treatise. "They were fugitives when they met, and each responded with passionate recognition to the desperation in the other." Much of the book is about walking the Great Wall of China, a performance entitled "The Lovers" and originally intended as a marriage ceremony. The plan called for the artists to start at opposite ends and walk 2,500 kilometers each, meeting in the middle to marry in the middle in a traditional Chinese ceremony. Things didn’t turn out quite as planned, as Marina and Ulay’s relationship collapsed during the long period of negotiations with Chinese officials, and the 1988 long walk became a separation ceremony bringing an end to their collaboration. McEvilley was with Marina and Ulay throughout their whole process and expands their relationship journey into a poetic exegesis of relationships in general. — James Croak, Artnet. com