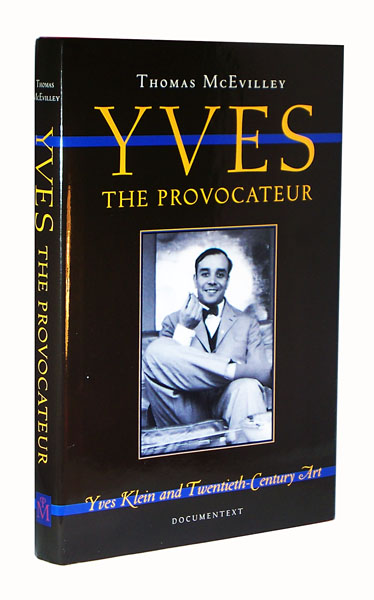 For seven years, from 1956 to 1962, a young French artist electrified the European art world with visual, conceptual and performance art works far ahead of their time. His rise was wildly celebrated by some as the appearance of a prophetic genius, and derisively dismissed by others as scandalous nonsense. His monochrome paintings, body art works, fire paintings, conceptual exhibitions and music, and monumental public space works threatened to upend the very categories of art, in both Europe and America. Indeed, after his tragically premature death in 1962, some of the most far-reaching transformations in contemporary art followed directly in his wake. But by the 1970s his reputation seemed headed for oblivion, until in 1977 a young classics scholar at Rice University, Thomas McEvilley, proposed Klein for a retrospective show to Dominique de Menil, then director of the Rice gallery, and wrote several texts about Klein that would transform our understanding of Yves Klein's aesthetics. The project grew to involve major institutions, resulting in 1982 with exhibitions in Houston, New York, Paris and Chicago. Virtually overnight Yves Klein's art reentered the art canon. Coincidentally, the career of an important critic was launched.

Yves the Provocateur collects those writings of Thomas McEvilley which rejuvenated Klein's stature and hitherto were only available in journals and exhibition catalogues.  In effect, it provides the "skeleton key" to clearly examine the full dimensions of Klein's accomplishment. In two opening essays, McEvilley briefly surveys and places Klein's art into context. Then, in the centerpiece essay -- which amounts to a miniature critical biography bearing all the best features of a novella -- he traces the formative and crucial events in Klein's life. Finally, he describes Klein's intellectual development, demonstrating how Klein embedded and parodied in his work the philosophical system of a particular form of Rosicrucianism. An extensive chronology is appended at the end. Twenty-one photographs, most of them full-page, appear throughout.

Add to Cart
Also available from:
<
>
"Yves the Provocateur is an extraordinary analysis of the art of Yves Klein — created from the brief period between 1956 and 1962, and embodying a critical aspect of art history's transition phase from Modernism to post-Modernism. Duotone photographs of Yves, as well as reproductions of a handful of his distinctive works, illustrate this methodical, thoughtful, and richly detailed study. A chronology and notes round out this absolute 'must-have' resource for anyone seeking to better understand or learn from Yves' creative genius. Highly recommended." — Midwest Book Review