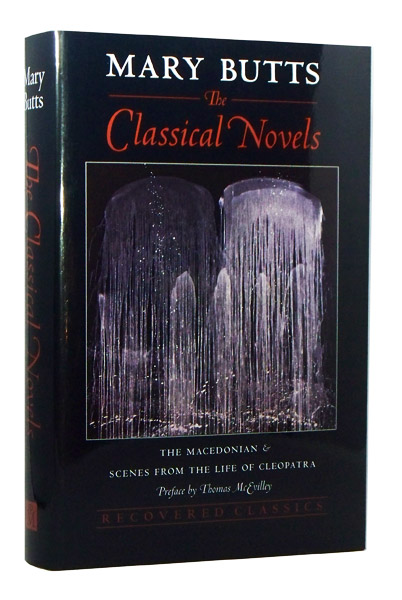 The Classical Novels : The Macedonian & Scenes from the Life of Cleopatra

Mary Butts had a keen interest in classical history, and an imagination tuned to understanding the personalities of visionary rulers. These two historical novels, published in England during her lifetime to considerable acclaim, are surprisingly well-suited for publication in one volume. The first novel follows Alexander the Great's life, death and legacy; the segue to Cleopatra 250 years later presents an equally strong, intelligent, and capable queen in Alexandria. Each novel is thoroughly researched and richly imagined. Butts' style is fluid, the writing is crisp and colloquial, and the scenes are dramatic. These are historical novels unlike all but a few others; Butts' purpose is to go so beneath the conventional understanding of Greek and Roman history to retrieve specific meanings relevant to her contemporary social and political arenas. She realized, for example, how distorted and sexually compromised the figure of Cleopatra had become in the hands of male historians and dramatists (only Shakespeare is partly exempted); and so with fierce dedication Butts sought to retrieve the truth and dignity of her life. This volume of Mary Butts' work includes two complete novels and three related short stories: "The Later Life of Theseus, King of Athens," "Bellerophon to Anteia," and "A Roman Speaks."

​The English novelist, poet and critic Mary Butts (1890-1937) is one of the most enigmatic of the early Modernists, and the last great lost writer of the era. During the 1920s and 1930s she was as well-known and highly regarded in England as her now more famous contemporaries: H.D., Katherine Mansfield, Mina Loy, Virginia Woolf, Dorothy Richardson, Jean Rhys, Djuna Barnes, Kay Boyle. She was a writer of high energy and an original style, and possessed particular insight into the generation which survived the First World War. McPherson & Company has been reissuing her works in uniform, newly edited volumes since 1992.

Add to Cart
Also available from:
<
>