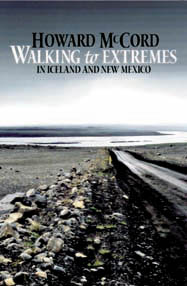 SKU: 1868
$15.00
$15.00
Unavailable
per item
"Howard McCord's poetic voice calls us to be companions in his vision quest: Seeking the truth in the deserts he loves. He writes the reality of the Southwest landscapes, and also its songs and voices. In these brilliant and philosophical essays Howard shares his intimate and sometimes haunting journey." — Rudolfo Anaya

In this compact, essential book, a veteran poet and inveterate outdoorsman explores the hidden histories of place, the psychology of aloneness, and the human condition in inhospitable spaces. The author of the celebrated novella The Man Who Walked to The Moon(see link below), McCord brings to life three of his desert walks in New Mexico and Iceland, and one particularly meaningful rock climbing ascent in real stories told by a natural raconteur. For its spirit of adventure, deep intelligence, well-crafted prose and generous wisdom, Walking to Extremes will be treasured both by the armchair adventurer and the most ardent backpacker. With one illustration and five photographs.

​Paperback, 144 pages, 5 x 8", 2008, 978-0-929701-86-8
Finalist: 2008 Foreword Book of the Year Award —  Adventure
Add to Cart
Also available from:
<
>
"On the face of it, the intent of the book seems simple enough; namely, to share his experiences hiking the arctic deserts of Iceland and the hot deserts of New Mexico. But Walking to Extremes is no more a hiking book than the New Testament is about life in the provinces during the times of the Roman Empire. For one thing, the trails he describes are not the kind of trails you would take your family for a day of fresh air and exercise. In many cases, there are not trails at all, just vast expanses of some of the most inhospitable terrain hikers could imagine. And for another, I get the feeling that the hiking, as arduous and demanding as it becomes at times, is not the end game, but serves more as a platform for facilitating the philosophical and spiritual journeys McCord takes as he is walking....For me, reading Walking to Extremes was a spiritual, almost hypnotic experience, and, at times, I found myself plodding alongside McCord listening to the voices of ghosts as he conjured them, while conjuring a few ghosts of my own. Walking to Extremes by Howard McCord is a deep, sometimes profound, always readable book that is well worth your time. . ." — Rod Standerfer, Reader Views (readerviews.com).

"Surely a book with the title Walking to Extremes must call to anyone afflicted with incurable wanderlust -- or at least it called to me, especially because I share Howard McCord's passion for walking, as well as his Western roots. ...Of the four essays in Walking to Extremes, two are very long ('The Arctic Desert' and 'Jornada del Muerto' weighing in at 56 and 54 pages, respectively), and two are very short ('The Apache Kid' and 'On Top Again,' each under ten pages). The reader has a delightful choice between a short walk or a rigorous hike....McCord's desire -- no, need -- for remote places has nurtured a lifetime of offbeat adventure, and in Walking to Extremes readers will be glad to travel with McCord, as long as they don't mind a bit of wandering hither and yon." — Kate Dernocoeur, Third Coast

"McCord's observations are what many of us have sensed and experienced while walking in isolated areas, but have never been able to put into words in the masterful way McCord does.... I highly recommend this publication for those who appreciate the desert and walking, and especially for those of you who seek the vacarious experience of trekking along isolated stretches of El Camino Real de Tierra Adentro. This wonderful book was a real delight to read." — Michael Romero Taylor, Chronicles of the Trail, 5.1, Winter 2009

"I have reread all of your lovely book, Walking to Extremes. I find this to be your masterpiece. Beautifully put together and balanced. . . . I drink a toast to you!" — Ted Enslin

"McCord's vivid language paints the colors and the shape of the many landscapes through which he threads his way." — Martha Shaw, Ohioana Quarterly

"He urges our steps and points our view. A figure shimmers in the heat ahead -- I'll follow Howard McCord the distance." — Guy Birchard

"Writer and adventurer Howard McCord's new book is about walking. He does a lot of it. Along the way, he - to use a cliché - waxes poetic about the environment he's seeing, as well as the random thoughts that go through his mind as he ambles through the landscape. In this latest book, McCord writes of his treks across the arctic deserts of Iceland and the deserts of New Mexico - hence the title of the book. The first part of the book is about his Iceland trip. His words are broken into brief paragraphs that sort of serve as McCord's stream of consciousness. He is able to pull it off without the book being disjointed. His thoughts are provocative and meaningful in the context of landscape. At one point, McCord writes: 'I have learned walking that language does not break silence any more than I disturb a rock by stepping on it.' This phrase is a good one to represent McCord's feelings about the power of walking through landscapes." — Inside Outside Magazine

"Readers who are just now discovering Howard McCord should count themselves among the fortunate. In size, Walking to Extremes is a little book, just about the right heft to pack the next time you head out on a week-long ramble in a nearby desert. But in content it’s a mighty book, rich with clear images and graceful sentences. My advice is to read the book slowly. Let the words simmer into a restorative broth and then savor each sip. The real value of this book lies in the mindfulness of its author. Howard McCord is a percipient observer.
"McCord, known mostly for his poems, makes it clear he doesn’t feel the usual sweeping distinction between poetry and prose. Poetry is full of “piths and gists,” while prose, he says, merely fills in more gaps. In this book, as in his own walks, McCord achieves his own rhythms. And he sticks to them. He loves the “genial stupor of long walking, the slow dissolve into footsteps, into one’s boots.” He calls it plod time and says he walks always at the same pace because simplicity allows discovery. In walking, he finds peace in 'the gentle whirling of my mind to the rhythm of walking.'
"The author grew up in El Paso, Texas, in the Chihuahan Desert. It was there that he first felt the call to explore—an invitation he usually accepted. With his roots firmly in the southwest, McCord took up walking as a lad, and he hasn’t stopped since.
"In essence, the book is an account of three treks taken by McCord over as many deserts. But if you imagine a desert to be mile after mile of sandy emptiness, you’re in for a surprise. He begins with a description of a ramble through Iceland. Those who haven’t exactly noticed a desert-like quality to Iceland might consider McCord’s comment: 'To be alone in the center of Iceland is to be profoundly, wonderfully alone in a desert with ice.' — Kate Reynolds, The Internet Review of Books

Read the full review at http://internetreviewofbooks.com/aug08/walking_to_extremes_in_iceland_and_new_mexico.html