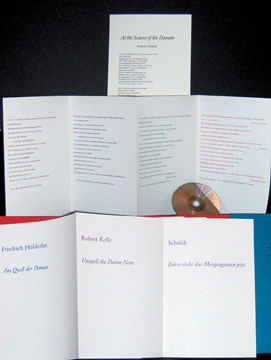 A collaboration by Robert Kelly, Friedrich Hölderlin, and Schuldt

In this unique book/text of serial homeophonic and literal translations, the great 18th-century German poet Hölderlin's mad symphonic poem, "Am Quell der Donau" — "At the Source of the Danube" — becomes the appropriate origin and metaphor for two contemporary poets' transformation and exploration of the German and English languages. There are five sections:

This 8 x 12" slip-cased production consists of two volumes: A. One folder containing the accordion folded sheets of the stanzas of the whole cycle, each printed in a different color. These sheets are suitable for framing or performance situations. B. An eighty page, thread sewn volume in wrappers containing: 1) the poem cycle in all five voices set up for line-by-line comparison and printed in the same 5-color scheme as (A); 2) a radio play titled "Schallgeschwister" ("Sound Siblings") constructed by Schuldt from the poem cycle; 3) a descriptive afterword by Schuldt, en-face in English and German; and 4) a full-length CD containing the full performance of Schuldt's "Sound Siblings," realized at the studios of the Bavarian Radio.

Documentext commissioned a literal translation of Hölderlin's poem by Susan Gillespie exclusively for this edition, permitting the English-speaking reader a starting point or contrasting conclusion. This unusual publication was produced by the noted printer/publisher Steidl in Göttingen, Germany, and published in the United States under the Documentext imprint of McPherson & Company in two strictly limited editions, totaling 176 copies:

§ The Deluxe Edition in marbled paper slip-case, lettered A-Z, signed by Schuldt and Robert Kelly, and containing an original holograph text by Robert Kelly. For this edition, go here.

Add to Cart
<
>
"​German conceptualist poet and chief mischief maker Schuldt & the unstoppable Robert Kelly enraptured an unsuspecting populace in a dervish of poetry at the Poetry Project at St. Marks Church (NYC), with their homeophonic destruction of Friedrich Holderlin's "Am Quell der Donau." Now McPherson & Co. has published it as an exquisite Object." — ABOUT.com: The Human Internet: Contemporary Poetry (w/ Bob Hollman and Margery Snyder)

"Another multi-media project — and perhaps the most intriguing publication of this fall — is Unquell the Dawn Now, a poem cycle originating from Holderlin's symphonic poem "Am Quell der Donau" ("At the Source of the Danube") by the contemporary poets Robert Kelly and Schuldt. Consisting of a series of homeophonic and literal translations (beginning with Kelly's homeophonic translation of the Holderlin), a radio play, and a full-length CD, it's a bizarre and fascinating examination of poetry and translation and the German and English languages--one of the rare instances in which Die Sprache really may sprechen." — BOOKS & CO.: Off the Wall Fall 1999 (by Steve Varni)
Robert Kelly was born in Brooklyn on September 24, 1935. He attended CUNY and Columbia University, and since 1961 has taught at Bard College. Robert Kelly has authored more than 50 published volumes of fiction, poetry and prose-poems. His 1967 novel The Scorpions first brought him a cult readership. In 1980, his book Kill The Messenger won the Los Angeles Times Book Award; and in 1985, A Transparent Tree received the prestigious Academy-Institute Award from the American Institute of Arts and Letters. He has been poet-in-residence at Tufts University and at the California Institute of Technology. His fiction has been translated variously into Italian, German, and French.

​Schuldt lives and works among languages. A poet, he is the author of 15 mostly German volumes, as well as accalimed radiophonic works, and live performances. Having compiled two peculiar New York languages from everyday observations (one American, one German), he is now writing a book in each of them. Three volumes of his work appeared in 1998, including Lustrufe im Garten (Droschl).