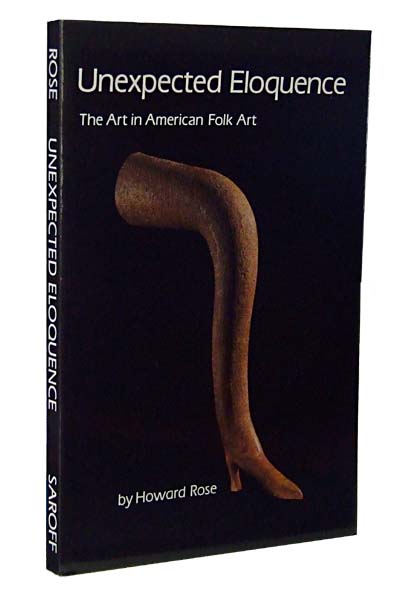 SKU: 52016
$15.00
$15.00
Unavailable
per item
An art collector and dealer by profession, Howard Rose developed a passionate interest in American folk art thirty years ago. Concerned by the lack of serious art criticism on the subject, and disturbed by the condescension with which folk art is generally treated by fine art critics and connoisseurs, in the late 1970s he wrote Unexpected Eloquence, the first chapter of which appeared in Art in America."Just what is the nature of our variant on embellished handicrafts," Rose asks, "that we should explore it for a complexity and ambition which Western cultures have always reserved to the sphere of mainstream art?" In answer, he begins by narrowing the subject to exclude mere Americana and focuses instead on a small but significant body of works with the same set of evaluative measures that are applied to mainstream art. His intent is to discover distinctive aspects of the American experience that might account, beyond individual genius, for these extraordinary achievements. Rose describes a revision of conventional preconceptions about the multi-faceted American heritage, and in doing so he challenges the art establishment and opens up the field to the larger audience of art lovers. Throughout, his writing is elegant, carefully argued, occasionally impassioned. The final chapter, presented as an appendix, details the various conceptual problems in folk art criticism.
​
Paperback, 160 pages, 21 color, 25 b/w photos, 6 x 9", 1990, 1-878352-01-6
A Raymond Saroff Publication
Add to Cart
<
>
"Among collectors of American folk art, one of the most embattled was Howard Rose, the novelist and esthetician. Not one to hedge his bets, he did not hesitate to say, among much else, that he knew of 'a sheet-iron curlew weathervane, circa 1870, that is fit to have told the wind for any mosque in Byzantium.' ...Howard Rose was, that is to say, a polemicist in a grand tradition." — John Russell, The New York Times

"If serious art critics consider it at all, they usually regard American folk art as mere craftwork, albeit imbued with a creative spirit that is rooted in our country's cultural, social, political, and religious heritage. In this critical analysis, Howard Rose... challenges the condescension of this notion and lauds folk art's freshness, simplicity, and freedom from formal principles. Drawing a distinction between American folk art and Americana crafts, Rose defines the former in terms of individual genius and the latter in terms of 'material culture.'...Rose issues an eloquent plea for the respect a misunderstood art form rightfully deserves." — Booklist (American Library Association)

"Written in an elegant, precise style, the work argues that when the standards of excellence and aesthetic purity associated with the fine arts are applied to folk art, the artistic validity of folk art becomes apparent." — Small Press: The Magazine of Independent Publishing

"The question, though, is what makes some folk art fine art and some not. It's that issue that Rose addresses in Unexpected Eloquence, with a text that is entertaining as well as informative, not an unexpected combination from Rose, since he was also a novelist." — Poughkeepsie Journal

"Rose describes a revision of conventional preconceptions about the multi-faceted American heritage. In so doing, he challenges the art establishment and opens up the field to the larger audience of potential art lovers." — Columbus Dispatch

"A true testament to excellence in the field of American folk art appreciation." — Midwest Book Review