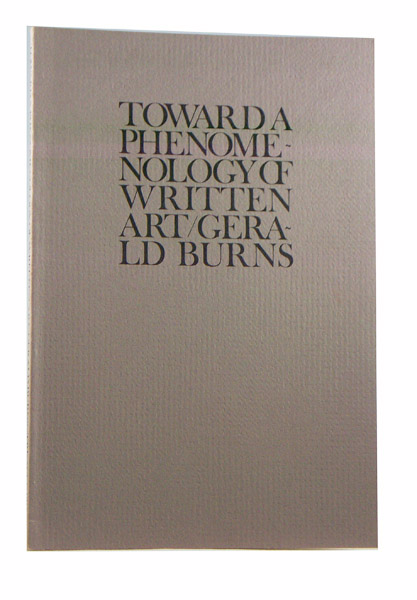 Toward a Phenomenology of Written Art

SKU: 2355
$10.00
$10.00
Unavailable
per item
The two essays which comprise this book —  "The Slate Notebook" and "A Hermetic Journal" — are concerned with the ideas and problems Gerald Burns encountered while simultaneously working on long poems: how it matters that written art is written, the relation of medium to creativity, why writing something down makes it more real, how verse might engage the question of magic more directly, and what magic as an activity is.

"Elegantly composed perceptions of language." — ALA Booklist
Gerald Burns was born in Michigan, attended Harvard, Trinity College (Dublin), and Southern Methodist University. His books of verse include Boccherini's Minuet, Letters to Obscure Men, A book of Spells [first third](Salt Lick), and Longer Poems (Dalkey Archive). He authored another collection of essays, A Thing About Language, published by S.I.U. Press. A prolific writer of distinctive long-lined verse much remarked by Robert Creeley, among others, Gerald Burns died suddenly on July 23, 1997, aged 54.