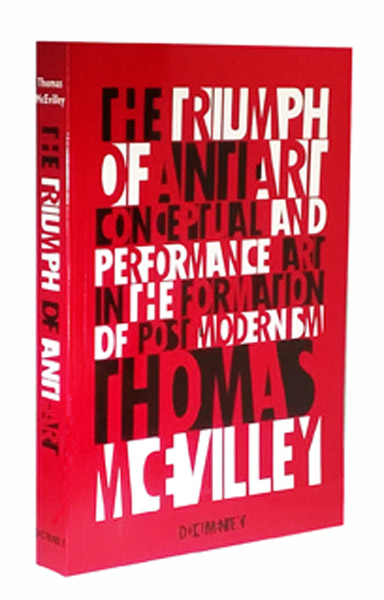 The Triumph of Anti-Art : Conceptual and Performance Art in the Formation of Post-Modernism

SKU: 1925
$23.00
$23.00
Unavailable
per item
From roughly 1965 to 1980, Conceptual Art and Performance Art took center stage throughout the western world, introducing new and complex ideas to the practice of contemporary art which reverberate to this day. Thomas McEvilley's The Triumph of Anti-Art not only explains the origins of these controversial and compelling art forms, but also uncovers many relatively unrecognized yet indisputably important artists, American and European. He guides the reader through a thicket of seemingly arcane meanings of these nonrepresentational art form, and brings clarity to the intentions and agendas of these artists, as well as to their real world contexts. The long-term effects of "anti-art," and the development of the pluralistic situation known as post-Modernism, are described in vivid detail. From the Greek philosopher Diogenes, through the 19th-century German romantic tradition, to the modern art critic Clement Greenberg, McEvilley traces philosophical ideas and political impulses that temporarily led to a toppling of painting and sculpture in the decades right after World War II. Following an overview of Modernism and Marcel Duchamp's influence, a chapter on Yves Klein sets the state for surveys of Conceptual Art and its practitioners, including Bernar Venet, John Baldessari, and Francis Alys. McEvilley then gives equal focus to Performance Art with chapters on Andy Warhol, Brian O'Doherty, and Marina Abramovic and Ulay, among others. At the end of the volume the "triumph" of "anti-art" is explored in depth, as are the origins of the terms, practices, and politics of global art history.

Paperback, 392 pages, 6 x 9", 2012, 0-929701-92-5
Sold out
Add to Cart
<
>
"A serious and well-argued study of conceptual and performance art, McEvilley explains how and where various forms and styles arose and outlines the work and theory surrounding key players. One of his main concerns is to show how anti-art, defined as art articulated through "(1) chance, (2) the Readymade, and (3) the procedure of creation by designation," came to be a major force in late 20th-century culture. A professor at the School of Visual Arts in New York City and author of several other books of art criticism, McEvilley unexpectedly starts his study with a look at ancient Greek Diogenes of Sinope, whom he calls the "patron saint of conceptual and performance art." From there the roots grow through Marcel Duchamp, Dada, Yves Klein, Jospeh Beuys, Marina Abramovic and Carolee Schneemann, among others. Not an introductory book, McEvilley's study brings fresh insights to nonrepresentational artists and their work, finding new ways of thinking about the origins and overriding principals . . ." — Publishers Weekly

"This penetrating volume must not simply be approached as a contradition of terms reflecting the paradox inherent in its subject matter....McEvilley introduces this brilliant compilation of essays with anecdotes of the Greek philosopher Diogenes, a progenitor of anti-art whose intention was to thrust society out of its self-satisfied slumber. ...Dating back to the early 1980s, these illuminating writings reveal McEvilley's critical role in the development of idiosyncratic conceptual pioneers such as John Baldessari and William Anastasi as they bring the collective unconscious up to public view... [McEvilley] succeeds in establishing the foundation by which we can probe the evil/live equation by which conceptual (mind) and performance (body) art join hands in the 21st century. The timing with which his publisher has released this historical testimonial — just as Performa'05 announced the revival of performance for a new century — makes this fascinating volume a critical marker for the transition." — Lisa Paul Streitfeld, Art New England

"Much has been written about traditional art forms of drawing, painting, photography, sculpture, music, plays and movies; but little has been said about the more esoteric and avant-garde forms of conceptual and performance art; The Triumph of Anti-Art: Conceptual and Performance Art in the Formation of Post-Modernism handily remedies this deficiency. The Triumph of Anti-Art is an absorbing tour through the origins of the controversial art forms of conceptual art and performance art, walking the reader through the seemingly complicated and ambiguous meanings and nuances of such formats. Chapters specifically focus upon the works of Francois Morellet, Bernar Venet, Beuys and Warhol, Marina Abramovic, and many more. Offering enlightenment as to the motives, messages, and expressions of conceptual and performance art, The Triumph of Anti-Art is a "must-read" for novices and experienced art connoisseurs alike." — Midwest Book Review