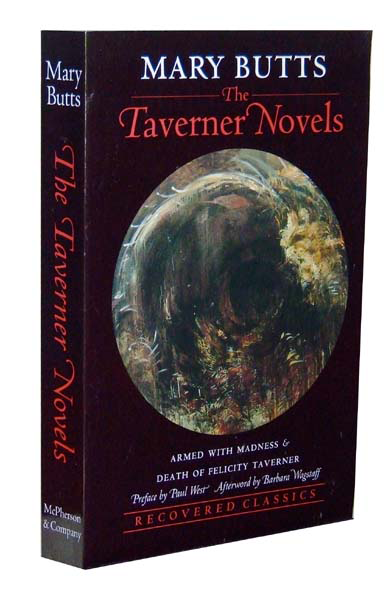 The Taverner Novels : Armed with Madness, Death of Felicity Taverner

These two novels together form an important work of modernist writing. Armed with Madness introduces a group of youthful but disillusioned characters who live a bohemian existence on a strange quest when an ancient chalice is found at the bottom of a well. Then five years later in Death of Felicity Taverner they are caught up in a mystery that hinges on the destruction of the Dorset wilderness.

Armed with Madness, very much a Jazz Age novel, introduces us to Scylla Taverner, her lover Picus, her brother Felix, and their closely knit circle of English, Russian and American friends, all in the vigor of youth and overflowing with passionate intensity. Their discovery of an ancient chalice at the bottom of a rustic well ignites a fury of conflicting emotion, and propels them on an adventure of mythic proportion -- a virtual re-enactment of the Grail Quest. Death of Felicity Taverner catches up with them five years later in a mystery that hinges on the destruction of the Dorset wilderness. Mourning their friend and cousin Felicity, they wonder whether her death was accidental? Murder? A suicide? Meanwhile, Felicity's opportunistic widower unveils his plans to savage their beloved Cornwall wilderness with a scheme for a vacation-home development, and threatens blackmail. Grief turns toward vengeance, and a struggle to preserve their lands turns ultimately, inevitably, to a violent climax.

Add to Cart
Also available from:
<
>
​[Reviews of the original publication of Armed with Madness]:

"Crazy as they are, Miss Butts' young people are a fascinating 'bunch.' The book is brilliant and subtle ... [and] might be described as Henry James in the idiom of 1928." — Time

"A sophisticated and most exquisitely written fantasy. ... There is no doubt that Miss Butts is a poet and a writer of often distinguished prose. And once you enter her world ... what goes on become exciting and unpredictable, Aldous Huxley and William Blake walking hand in hand, with what results one can perhaps imagine." — The New York Times

"A slightly mad elliptic novelette dealing with the mutual impacts of a set of young post-war English people who are sophisticated almost to the point of frenzy." — The Nation

[Reviews of the original publication of Death of Felicity Taverner]:

"This is an intellectual shocker of the first order. It is more than that, however. There is a tremulous beauty in all the descriptions of landscape ... and the memory of the dead woman hangs about the pages like a perfume." — London Sunday Times

"Miss Butts has never written with such mastery... The drama of the soul's conflict is boldly supported by her use of scenic background, the deep peace and threatening power of our West Country coastland... A work of art." — The Observer (1993)

"One of the memorable novels of the year." — Manchester Guardian (1932)