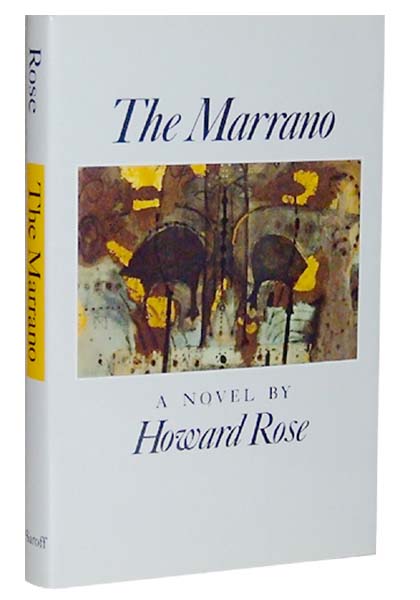 Although The Marrano was the last of the "False Messiah Trilogy" to be published, its action is mostly contemporaneous with Oak Street Beach, the volume immediately following The Pooles of Pismo Bay (both issued in 1990). The three novels together refract facets of Rose's preoccupation with the loss of ideals in American life, as represented through Matthew Lenart, Gordon Abul, and Reuben Poole. The story begins in Minneapolis ("There is much madness in Minneapolis," the narrator declares), where young Matthew Lenart, who tells the story, grew up as the wealthy son of a newspaper tycoon, and within sight of the estate of Shem Abul, Gordon's father, a wealthy Sephardic Jewish merchant. The Lenarts move on the highest rungs of Minneapolis society, and the Abuls contrive a similar station, but after Gordon steals Matthew's wife, appearances start to disintegrate, revealing a clandestine agenda. Two brutal murders set Lenart off in search of Gordie, whom he finds on Chicago's Oak Street Beach oscillating between a smart set of society hangers-on of polymorphous sexuality, and the tenderloin district riffraff. A mad mix of people and almost surreal events collide with subterranean Israeli espionage.

Throughout, the Sybaritic satirist Rose creates vivid characters and unflinchingly ribald dialogue. The high style recalls Ronald Firbank, the language is resonant, and scenes such as Gordie reciting de Sade (at his most scatological) in Chicago's "Bughouse Square" lend a startling conclusion to Rose's radical vision of the Jew in American society.

For the clothbound edition, go here.