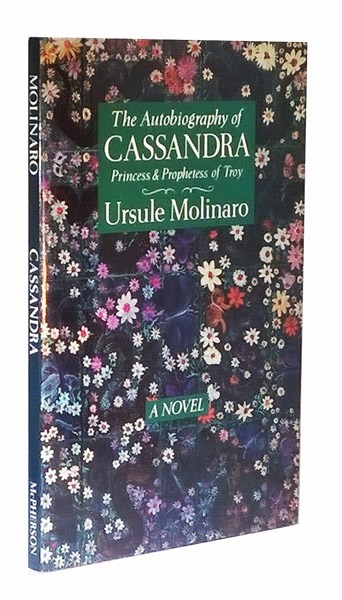 The Autobiography of Cassandra, Princess and Prophetess of Troy

This novel tells the Homeric story of Troy from the perspective of the woman who was condemned not to be believed — the perfect spokesperson for a contemporary feminist novel. Written with Molinaro's typical flair for concision, Cassandra is second only to the classic Positions with White Roses as Molinaro's best novel. And Molinaro has been sensitive to readers whose knowledge of Greek mythology is imperfect (meaning: all of us) by providing a witty glossary of the mortals and gods who people this dramatic story of courage and sacrifice. (Note: This novel was originally published in hardcover in 1979, four years prior to the better known and possibly derivative one on the same theme by Christa Wolf).

Out of stock. New edition in preparation for 2023.

Meanwhile, our Kindle edition is available from Amazon..

1 available
Add to Cart
<
>
"Molinaro's tender and subtly polemical reconstruction of the Iliad is a great book to read for its exploration of the themes that educated thousands of generations in the West, of women's role in every socieity, of mother/daughter legacies. Its irreverent take on the most famous war and its starkly moving female voices are closer to my heart than any in Homer. . ." — Euridice, American Book Review

"All those who know and love myth, who understand the role it plays in our contemporary consciousness, will be moved by Molinaro's poetic revision of Homer's story." — Los Angeles Times

"There are amazing similarities between Molinaro's Cassandra and the Cassandra novel of the German writer Christa Wolf, which it predates by four years.... [E]ven for the reader without much knowledge or interest in the old myths, Molinaro provides a diverse array of interpersonal relationships that often touch a sensitive contemporary nerve in the network that encompasses men, women and power." — Review of Contemporary Fiction

"A witty and moving novel...complete with gods, Greeks, Trojans, and a cast of thousands. Experimental novelist Molinaro's theory of the overthrown Trojan matriarchy is fascinating, and her prose is a pleasure." — Ms. magazine

"An original and convincing theory of the hows and whys of the low status of women in Greek society, a paradoxical fact that has often puzzled students of a literature so rich in strong female roles. . . . A book to be read for personal pleasure, for exploration of mother/daughter themes, and of potential use in women's studies courses." — Library Journal

"A witty, tender, and courageous reconstruction... The narrative holds interest well regardless of the reader's previous knowledge — or lack of knowledge — of classical sources." — Choice