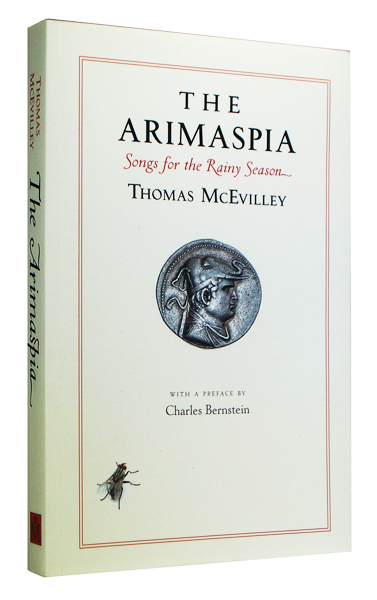 With a preface by Charles Bernstein (see link below)

"If Ezra Pound and Alexandre Dumas were to become one author and pen a historical novel about Greek philosophy and Indian spirituality in Late Antiquity, the result might be The Arimaspia. Best known for his writing on contemporary art and his novels, the late Thomas McEvilley was also a formidable philologist with a mastery of Greek and Sanskrit, and his neglected masterpiece, The Shape of Ancient Thought, dealt with the mutual influences of these two philosophical worlds. Arimaspia (his last novel) covers the same vast subject — but now as an adventure romance in which the escapades are metaphysical — and sexual. Alexander the Great and Nagarjuna appear, as does an unnamed modern college professor with a roving eye for sex-crazed graduate students — who may be a reincarnation of the unnamed Syrian/Greek narrator who makes the journey (on foot) to the East. Both characters are simultaneously cynics and mystics, all-too-human yet somehow immortal. Frankly I haven't had such a pleasurable reading experience in a dog's age: — like holding The Symposium in one hand and The Count of Monte Cristo in the other."

The Arimaspia is neither a novel nor a narrative poem, exactly, but a fusion of the two along the lines of the ancient Greek form known as the Menippean Satire. Wikipedia provides the following definition of the form: "The genre of Menippean Satire is a form of satire, usually in prose, which has a length and structure similar to a novel and is characterized by attacking mental attitudes instead of specific individuals. Other features found in Menippean satire are different forms of parody and mythological burlesque, a critique of the myths inherited from traditional culture, a rhapsodic nature, a fragmented narrative, the combination of many different targets, and the rapid moving between styles and points of view."

To read a sample of the text, see link below.

Add to Cart
<
>
The Arimaspia, McEvilley's second such work (after North of Yesterday), threads together early Greek cosmology and creation myths; the adventures of a Greco-Syrian philosopher-apprentice on a journey through Baktria (today's Afganistan) into India (shades of An Innocent Abroad); and the acrobatic office-hour shenanigans between a modern day professor of philology and his several female graduate students (as they variously study Assyrian, Egyptian, and Medieval Latin texts). The title refers to the lost work of the Greek poet Aristeas from the 5th century BC, which tells the story of a strange foreign people encountered for the first time. Interspersed throughout McEvilley's metafictional extravaganza are translations of some of the Greek poet Meleager's most famous poems from The Greek Anthology, as well as several astonishing original poems, various philosophical arguments, outlandish descriptions of imaginary ancient paintings (exemplifications of the rhetorical mode "ekphrasis"), and outrageous moments of black humor, pathos, and hilarity. The ostensible purpose of this book is to offer a literary work that mirrors the author's scholarly masterpiece The Shape of Ancient Thought, but the result is more profound: it is an imaginative link to the psyches of civilizations of thousands of years ago. Or, as Charles Bernstein remarks in his preface, "McEvilley’s more important, harder to grasp, teaching is that our erection of the dog-and-pony show of Western Civ has disconnected us from the living Western tradition that is our classical inheritance, an inheritance we have systematically misrecognized, squandered, and disfigured. ...Stunning in its archaic originality, The Arimaspia is a work of extraordinary learning, steeped in classical references that go well beyond the ken of most readers. At a certain point, the dance of the sources gives way to an immanent experience of refamiliarization, in which long-elided classical material come to life."

Issued for the occasion in a special limited commemorative edition limited to only 250 numbered copies and exclusively available directly from this site. The Publication Launch Event: It was SRO on Saturday, June 14th, 6:30 pm at The Golden Notebook in Woodstock, New York, at a launch celebration presented with special guests Peter Lamborn Wilson, George Quasha, Carolee Schneemann, Michael Perkins, and publisher Bruce McPherson. A brief film of Tom reading from the manuscript in 1994 was screened as well.