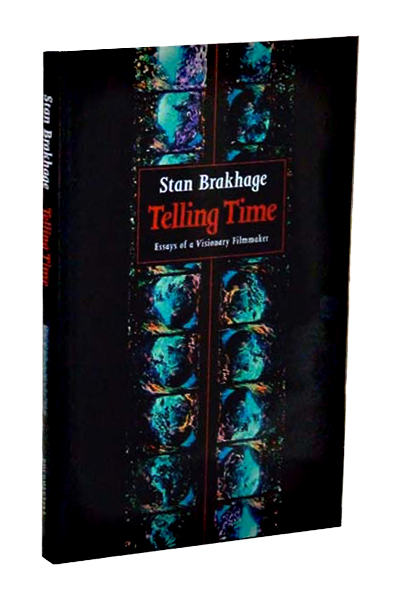 Throughout a career spanning half a century, Stan Brakhage — the foremost experimental filmmaker in America, and perhaps the world — wrote controversial essays on the art of film and its intersections with poetry, music, dance, and painting. Published in small circulation literary and arts journals, they were gathered later into such books as Metaphors on Vision and Film at Wit's End. Beginning in 1989, and for a decade thereafter, Brakhage wrote the essays in Telling Time as an occasional column for Musicworks, a Toronto quarterly. Ostensibly about the relation of film to music, they soon enlarged to explore primary concerns beyond film, including Brakhage's aesthetic theories based on the phenomenology of human cognition. In these essays he is as brilliant discussing Gertrude Stein or romantic love as he is on child psychology, astronomy, and physiology, all the while teasing out vital correspondences between the arts, and upending conventional ideas of how they are perceived. His investigations of other artists are models of sympathetic intuition and generosity. Above all, he shares his theories, discoveries and understandings in the spirit of establishing a groundwork for many varieties of human liberation. His prose is filled with flashes of insight, elaborated metaphors, playful elisions, shorthand puns and neologisms, personal digressions, surprising epiphanies, leaps of faith, and affronts to authority. He appeals to the imagination, and invites us to a more profound and personal experience of art.

“The twenty-six pieces collected [here] establish Brakhage’s place among the most elastic minds of his generation. ...Telling Time is an elegant, thoroughly engaging, timely and wide-ranging work… [it] is an essential book for anyone interested in Brakhage, theories of visual perception, the relationship of film to music, and the beats in-between.”—Brett Kashmere, Canadian Journal of Film Studies

Add to Cart
<
>
". . . Brakhage was profoundly concerned with the relationships among the arts, especially the interrelationship of painting, music, and poetry with cinema. In [these essays] he muses at great length on the philosophy of aesthetics, even attempting to formulate a specifically Canadian aesthetic by examining the work of several Canadian experimental filmmakers and other artists. . . . Brakhage's most masterly writings are probably those that analyze his abiding fascination with poetry of all eras (including that of Ezra Pound, which he both humorously skewers and openly admires) and his wide-ranging friendships with numerous poets, including Charles Olson. The author's humor and vast scholarship shine through, but the articles' densely elliptical style and the arcane [!] references [may] render them inaccessible to any but the most determined reader. Recommended for comprehensive cinema and arts collections." — Library Journal

"When Stan Brakhage passed away in March 2003, not only did the international avant-garde lose a groundbreaking artist, magisterial teller of tales, and esteemed public presence; it also lost an original, audacious and insightful theoretician. The twenty-six pieces collected in Telling Time: Essays of a Visionary Filmmaker, (first printed in the Toronto quarterly, Musicworks between 1989 and 1999), establish Brakhage's place among the most elastic minds of his generation. Similarly at ease discussing Russian poetry, romantic love, visual perception, child psychology, human cognition, and religious belief as he is debating aesthetic or cinematic issues, Brakhage's essays spark from stream-of-consciousness synapses, sudden insights culled from a lifetime of voracious reading, attentive reflection, and piercing observation. . . .Telling Time is an elegant, thoroughly engaging, timely and wide-ranging work. . . [it] is an essential book for anyone interested in Brakhage, theories of visual perception, the relationship of film to music, and the beats in between." — Brett Kashmere, Canadian Journal of Film Studies, Spring 2005

". . . [the essays in Telling Time] began as discussions of film's relationships with music, but soon explored more philosophical routes. Enjoy this collection not just for its film insights, but for its reflections on modern culture." — Midwest Book Review
Fred Camper's online Brakhage resources Stan Brakhage on the Web
Contents: About Time, Playing the Stars, Credo, Bio-Logic, Robert Gardner's Indigenous World, Phoneme Phenomenology, An Inner Argument, In Consideration of Aesthetics, Romanticism, Geometric versus Meat-Ineffable, An Exercise in Ineffability, Painting Film, The Lost Films, Space as Menace in Canadian Aesthetics, Fire in the Mind, Exultations of Bruce Elder, The Nature of Image, Having Declared a Belief in God, The Fall of the Leaves.