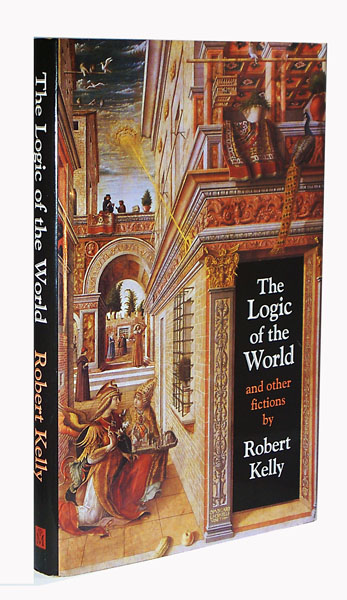 The Logic of the World and Other Fictions

"There is such beauty and mystery and surprise on the path we are seductively invited to follow in Robert Kelly's The Logic of the World. Do not miss this deeply charmed and haunting foray."

​The thirty works in this fifth collection of short fictions trespass knowingly into fictional realms of droll lyricism, audacious description, studied anachronism, sensual immediacy and subtle compassion. In one, a woman waits at a window for the moon to return her body; another story reveals the triple identity of Don Juan; in still another, an itinerant tragedian invents a dangerous form of theatrical performance; and in the title story a dragon questions a youthful knight's errancy, as well as his sanity. Scattered throughout are nine pieces known as "sudden fiction," a genre Kelly named, while other tales appear in the guises of myths, letters, rituals, and even dreams.

To read the opening story, go to the link below.

Four previous volumes of Robert Kelly's manifestly original fictions have been hailed as "exhilarating…full of signs and wonders" in the New York Times Book Review, "sparking, multiform, yet indivisible" in American Book Review, and "tantalizing, unsettling" in the Review of Contemporary Fiction. ALA Choice rightly points to his "affinities with the writings of Borges, Nabokov, Calvino, and Coover."

Four Square Meters / Baby / Crucifixes / The Example of the Hawk / The Wandering Jew / Andromeda / Offshore / The Priest's Mistress's Story / The Logic of the World / The Sacred Garden / Trigonometry / Two Towns / The Tureen / The Plumber / Woman with Dog / Saving the Moon / La Tache Vertigineuse / The Skirt / The Cryptanalyst / Outside / The Secret / The Yoke / The Geese in December / A Simple Room / The Ritual / Letter to Thomas Bernhard / The Bridge Near Zamorek / Edmund Wilson on Alfred de Musset: The Dream / Confessions of Don Juan/ Kafka's Brother

The Review of Contemporary Fiction

Rarely does a collection's title so perfectly capture the strategy of its constituent stories’ composition—with the exception that its phrasing implies a book concerned only with one logic and one world. In stories written in modes ranging from fantasy and fable to a letter to Thomas Bernhard to a realist account of a young woman interviewing an elderly author, Robert Kelly pursues fragments of logic to the point of their exhaustion. These logics are often small and slim. They are exhausted quickly, frequently in the space of two or three pages. These logics, whether embodied or disembodied, spoken or unspoken, become the protagonists of their stories. In 'Baby,' a newborn explains to the reader in high-flown, insistent language the reasoning behind his assertion that he is God. In 'The Sacred Garden,' monks mark off a section of land to watch and study without interference. In 'The Example of the Hawk,' a young actor reads a story entitled 'The Example of the Hawk,' and it changes his life, transforms his ideas of theater. He lives and dies by this epiphany. The actor’s story, a dramatic response to Robert Kelly’s fiction, suggests how Kelly might hope to affect readers. He is not afraid to demand, command, explain, or insist: 'Trigonometry,' a story told in chapter headings, instructs readers explicitly in how they are meant to receive and understand it. We are meant to take something away from these stories—which sometimes barely qualify as narrative—back into the world with us. However, as the ambivalent ending of 'The Example of the Hawk' suggests, Kelly harbors no utopian dreams. Even pursuing the best idea, putting one’s faith into the most beautiful story, is no guarantee. Kelly wants to change the world, but harbors little hope that it will be much better after. It will only be changed."--Mike Meginnis